You are here: Home / The Build / Buildus Interruptus 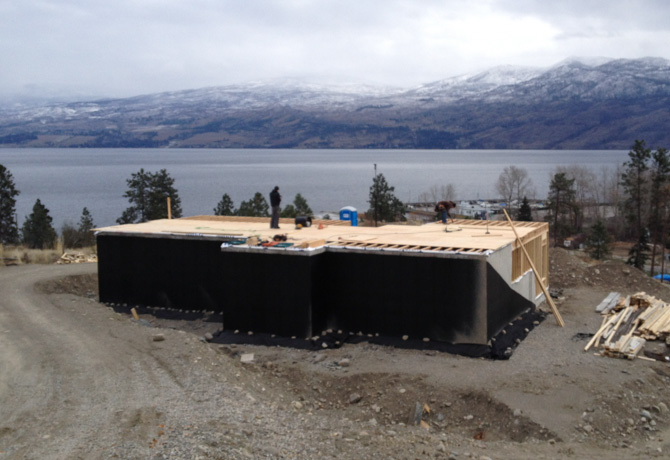 Well, it got cold. Real cold. Like -11 below. Real hard to work productively in that temp. You make mistakes when it’s cold and windy as well. Like using an angle grinder to saw off bolts with one hand while holding the home wrap madly flapping against the house. And having it get away on you and hitting that other hand. Not feeling it, but suspecting all was not well. Removing the glove to confirm it. Off to the medical clinic. One hour later the half inch gash on my left hand crazy glued together and the bad news from the doctor being that I was good enough to go back to work. I’ll consider this event a wakeup call, and try to be more on the ball.

Anyways, that happened while putting in the subfloor.

Little difficult to work with the hand, and still the brutal cold, until . . .

Hawaii! For 9 days! In 29 degrees everyday. Swimming with turtles. Celebrating Allison’s 50th! I don’t know what’s happening in this picture, but thought I’d include it.

Fortunately, not much happened while I was away, because of the cold which dropped to -16. I say fortunately because I didn’t want to miss anything, though I did have a dream on the trip that when we came home, the house was done. That wouldn’t have been bad either, mind you.

The other reason, little, except for finishing the floor and covering it all up, was that 2 crew from other sites were all in Hawaii, so Dean and Joel were reassigned. Punishment for not going to Hawaii. So, raise a Longboard Lager to those who escaped temporarily, and to those who valiantly worked while we lounged. 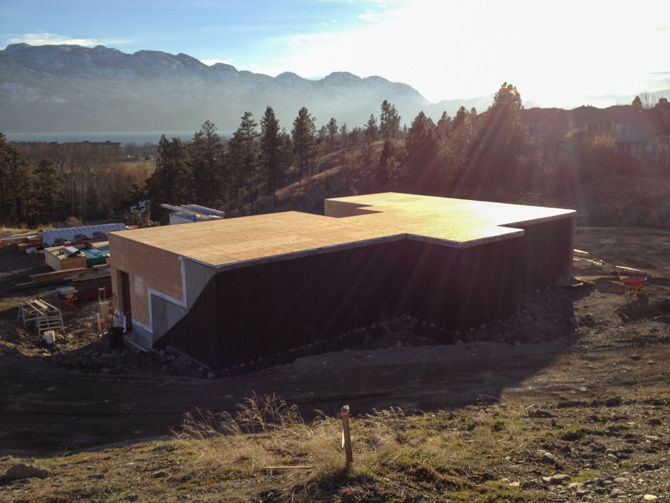 Lucky, again, for me, the weather was much nicer and I could ease back into the chilly north. Though, rookie mistakes continue to plague me. Yesterday I cut the cord I using to cut rebar with.

James, the plumber came to install the floor heating, and this is who he brought!! I had to let Rosanne know. Half bernese, half golden retriever, fully cute. Nine weeks old. So calm and well behaved. Nelson even charmed this noted cat lover. Bob doesn’t know. Shhh.

Now things are happening inside. Vapour barrier is down, in-floor hydronic heating is installed. Rebar is close to being finished. On Monday, if all goes to plan, we pour the slab. Pretty excited about that.

Previous Entry: Joists To The World…
Next Entry: End o’ 2013